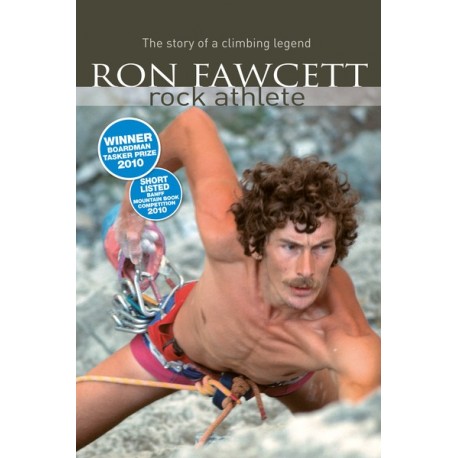 WINNER - The Boardman Tasker Prize 2010
Shortlisted for the Banff Mountain Book Festival 2010
Ron Fawcett is a natural-born climber. In 1969, while still at school in his native Yorkshire, he tied into a climbing rope for the first time and was instantly hooked. From that moment on, it seemed nothing else in his life mattered nearly as much as his next vertical fix.

Ten years later, Fawcett was the most famous rock climber in Britain and among the best in the world, part of a new wave whose dedication to training transformed the sport, pushing standards further and faster than ever before – or since. His legacy of new climbs ranks him alongside the very best in the history of the sport.

He was also the first to style himself a professional rock climber, starring in the landmark television documentary Rock Athlete, and appearing on the covers of magazines around the world. But far from enjoying the fame, Fawcett found the pressures of the limelight too much to bear, and at the end of the 1980s he faded from view.

Now, for the first time, he tells his extraordinary story, of how his love of nature and the outdoors developed into a passion for climbing that took him to the top – and almost consumed him.

Excerpt from the adjudication speech by Ian Smith, chair of the Boardman Tasker judges for 2010:

'The story of the life of a genuine legend of British climbing, Ron Fawcett, Rock Athlete by Ron Fawcett with Ed Douglas. This is an engaging portrait of an unassuming yet quite remarkable climber told with humility and frankness. Beginning in the small Yorkshire village of Embsay the book catalogues how Fawcett’s talent and drive took him all over the world, repeating the hardest routes wherever he went and pioneering exceptional climbs at home and abroad. As well as climbing Fawcett was also a pioneer in dealing with the commercial pressures and opportunities that were coming into climbing in the 70s and his experiences are honestly explored. Also, Fawcett is not shy of dealing with issues in his personal life and his candour is to be commended. Praise must also be given to Ed Douglas who, presumably, while shaping and forming this book allowed Fawcett’s own voice and mannerisms to still shine through. At the conclusion of this book Fawcett emerges as a shy, unassuming and thoroughly likeable person as well as an undoubted climbing legend."